Another amazing visit for week #10. Remember [David], the store manager from week five? Well since we were planning on going in on Tuesday, we call the store up before we head over. [David] picks up. I ask him if [Steve] is in. He tells me “yes” and I tell him we’re heading over very soon.

We show up and it’s not to busy inside. We soon get met by [Steve] and he guides us to a few selections. We are definitely looking for something awesome. We ask a few questions about certain bottles and he tells us which ones are better.

I slip in the question, “How’s it going with getting that Old Forester bottle?” He tells me the Birthday Bourbon should come soon but once he gets it in he’ll give me a call. [David]’s on his way over and I ask [Steve] what distribution is looking like for the Buffalo Trace Antique Collection. He tells me that it shouldn’t be too bad in price. “I actually meant, when should it get distributed? But that’s good to know too.” I say to him. He let’s us know late October should be the time-frame. Excellent, matches right up with our goal: Bottle of Eagle Rare 17 by the end of October. 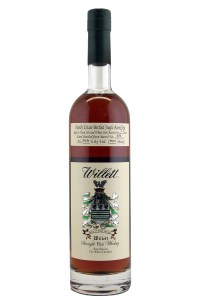 We pick up a few bottles: Smooth Ambler Yearling Bourbon and Willett Straight Rye Whiskey 7 Year. Then [Steve] heads to the back room. He comes out a minute later with a bottle of Sazerac Rye. He told us about this week one. This is a rare bottle. What makes it crazy is that it is less than $40 too. “You guys want it?” [Steve] asks. Of course we do. [David] says, “Don’t tell anyone you got that here.”. We’re like “We won’t but we’ll let them know they gotta earn bottles like this”. It’s so cheap, most people would say that they can afford it, but so rare that they don’t just put these bottles on shelves.

We get to the register and talk it up. About Sazerac, about the Antique Collection and about some other whiskeys that are getting some notoriety. We end it out with the handshakes all around and make our way back home with smiles.

I would say, we had a great time of progress and fun. Till next week, check out our soon to come (if not out already) reviews of Sazerac Rye, Smooth Ambler Yearling Bourbon, and Willett Straight Rye Whiskey 7 Year on our Whiskey Reviews Along The Way page.

Talk to you next time. By the way, if you have a whiskey that you would want Trevor and myself to try, please check out our Contact Us Page. Thanks!