So another great week of progress with week six. Not to mention the official request was given, but I’ll get to that in a bit. Friday comes around again and Trevor and myself are excited to follow through with our usual Whiskey Friday tradition. We meet at the liquor store hoping to find a good “Back Room” whiskey. We walk in and we can tell the place is a little busy.

[Steve] sees us and breaks free of the register to speak with us. He knows what we’re thinking already and let’s us know that there’s nothing new in the rare whiskeys, but he does point out a bottle of Dalwhinnie Distillers Edition scotch. It’s about $100 and we’re happy to hop on to that “Top Shelf-er”. We shake hands again and walk out happy with some headway. 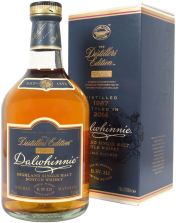 I would almost want to say the week was not too much progress, but the story is not over. I (Cole) get a text on Tuesday: “Hi Cole! this is [Steve] from [the liquor store]. Our barrel of Buffalo Trace arrived. It’s a single barrel version of standard Buffalo Trace. It is smooth, and outstanding. Stop by and get a bottle”.

I text Trevor, “Did you get that text too??” Trevor texts me back mentioning his pure excitement. We meet up that night at the store and talk to [Steve] about the barrel they ordered. Now this isn’t just any Buffalo Trace. This was tested and approved by this liquor store with many taste tests to represent the special store edition for these guys. He asks us if we want to see the barrel itself. Of course we do! I’m thinking, “This guy’s got solid connections at Buffalo Trace Distillery”. I even ask him about it and he confirms it. He talks to a good few people over in Frankfort, Kentucky. Let me remind those reading, Eagle Rare 17 is a Buffalo Trace product! We discuss whiskey for another few minutes and both Trevor and I grab a bottle.

Here’s where it gets good. We were officially waiting until Friday the 21st to lay down our one item wish list to [Steve], but the moment was perfect. At the register [Steve] says, “Let me know if there’s anything you guys want”. Holy cow! I was debating in my head for no longer than a second and lean in to the counter,

“[Steve], as long as we’re talking Buffalo Trace, we would like to request Eagle Rare 17. We would do whatever it takes to get it. I mean, we would certainly throw down some good money for that.”

I don’t remember everything said, but I made sure sure that our wish list was known. But two things happened:

My mind sort of explodes at that point, but I dig deep to keep it together. We just hit a major milestone and with only positive potential. We could very likely be on our way to that bottle as nature truly intended. I already start thinking of when I will tell my grandkids about the importance of setting goals., but we shake his hand and head out.

Just in case you didn’t catch it all, here is the progress earned:

What a magnanimous week! One step closer and a whole lot of hope. Now who says dreams can’t be achieved?

Please check out our upcoming (If not out already) review of Dalwhinnie Distillers Edition and we might as well do one on Buffalo Trace (the special edition one for the store) too in our Whiskey Reviews – Along the Way section.